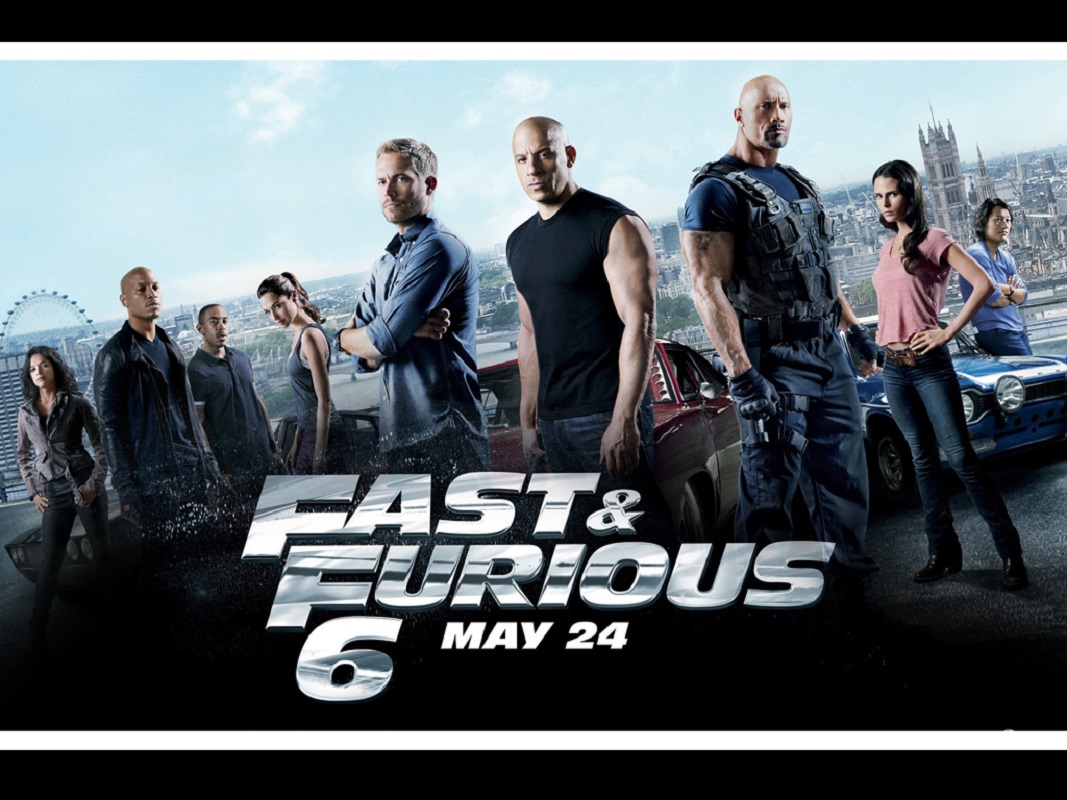 Fast & Furious 6 (actually titled Furious 6) roared out of the gates this Memorial Day Weekend to gross $120 million dollars domestically.  It also grossed another $158 million worldwide and opened in the #1 spot in 60 countries.  It is Universal Pictures biggest weekend opener ever and has broken international records as well.  Most people who see that it has made this much money are flabbergasted.  How can a stupid franchise about dumb guys and cars make this much money?  Is everyone in the world stupid?  The simple answer is that the franchise isn’t stupid.  It may have started that way, but by listening to fans, it has grown into one of the biggest franchises around, not featuring superheroes, YA fiction heroines, or aliens.  There is something to be said for that.  However to understand how this movie made and will make so much, you have to understand where these movies came from.

The Fast and The Furious came out 12 years ago and marked the emergence of mono-syllabic action star Vin Diesel.  No one expected that movie to make $100 million plus, but it did on the strength of a movie marketed to bros, by bros.  It is not by any stretch a “good” movie, but it was a fun rip-off of Point Break, and is an extremely serviceable action film.  2 Fast 2 Furious, widely derided as the worst of the franchise, is a guilty pleasure of mine.  It marked Vin’s exit from the franchise but Tyrese’s entrance.  This film was the worst directed of the bunch (it’s reliance on CGI and bright locales was weird), and the relationship between Tyrese and Paul Walker’s characters was the most unintentionally gay thing since anything Tobias from Arrested Development has said.  However, after two go rounds, the series was in danger of becoming an afterthought.

The next film in the saga (as I like to call it), The Fast and The Furious: Tokyo Drift, is that catalyst that brought the franchise back to being something potentially bankable.  It returned none of the characters we liked or got to know, and it made the least amount of money, but it was actually the most straightforward film of the three at that point.  It, despite making very little domestically, was a hit overseas.  That coupled with a last second cameo of Vin’s character, made another film a certainty.  This is the first instance that the fans had a direct influence on the series.  Fans liked the actual movie, but in test screenings hated that it had nothing to do with the original films, so Universal basically begged Vin to come back and tease a sequel.  This paid off huge, as the next film aptly titled Fast and Furious (shaved off those pesky “the’s”) became Universal’s highest grossing opening weekend and proved that there was still a very large audience.  It made a ton of money overseas as well and an improbable fifth film was definitely going to happen.

The franchise took it’s turn from almost dead, to success, but it’s next shift would pay off indelibly.  Up to this point these movies were known for their races, and their ridiculous dialogue, but keeping them tied to racing would always limit their appeal.  Universal took huge gambles with the next film Fast Five (best title yet):  They added The Rock as the next principle lead, which could have thrown off the chemistry, they brought back characters from each film, and they got away from street racing entirely.  Fast Five is a juiced up Oceans 11 film.  Somehow, this is exactly what people wanted in their blockbusters.  It is loud, fun, and it’s in on the joke.  It took five films, but here the Fast franchise really knew what it was about – a bunch of people with cars doing and saying ridiculous things, but having fun with it.

This brings us to the reason you are even reading this.  Furious 6 was destined to be a hit because the formula for the films had been perfected.  Racing is an afterthought.  As long as brawny men and tough women of all races were teamed up to fight with their cars, people were on board.  Action movies are not an intelligent breed, but they also need not insult our intelligence.  The classic Arnold and Sylvester films did this.  The Fast movies now do this.  They are huge ensemble films that use cars as the vehicle to tell the story.  This film is a straight up action film.  The heist element that worked last time is gone in place of a counter-terrorism action film.  By having the balls to shed pieces that don’t work and add new ones, the series could probably continue forever and remain fresh.  However, the big reason why Furious 6 made and will make more than all of the other films yet, is because it appeals to every ethnicity.  Your average action film is a mostly white cast with one, maybe two token ethnic actors.  The Fast franchise stars the multiracial Vin Diesel and The Rock, the asian Sung Kang, iranian Gal Gadot, black Tyrese and Ludacris, hispanic Don Omar and Tego Calderon (sometimes), and white Paul Walker and Jordana Brewster.  There is literally someone for everyone.  There are more ethnic people in the cast than “non-ethnic.”  The best part about the cast is that none of these actors really play into any racial stereotypes.  Tyrese might a bit, but he’s really just playing himself.  The bottom line is that people like to see people who look like them in films.  That should not come as any surprise.  The Fast franchise has the distinction of having,  inarguably, the most diverse assortment of actors working in principle roles.  Everyone gets to see someone who looks like them be the hero.

If the rest of Hollywood was paying attention, they would be listening to the fans as much as the Fast movies do.  We want our sequels, but we want our sequels, to be better.  We don’t want a Hangover film just to have a Hangover film.  Each Fast film since the third, has grown more diverse, has throw away pieces that don’t work, has brought back fan favorites, has brought in new cast-members the fans asked for, and has ended with a button that teases the next film.  Next July, when the seventh and final Fast film comes out with a certain popular action star in the villain role, it should not come as a shock when it becomes the new highest grossing film in the franchise.   Critics have even come around on these films now.  It’s time for you.