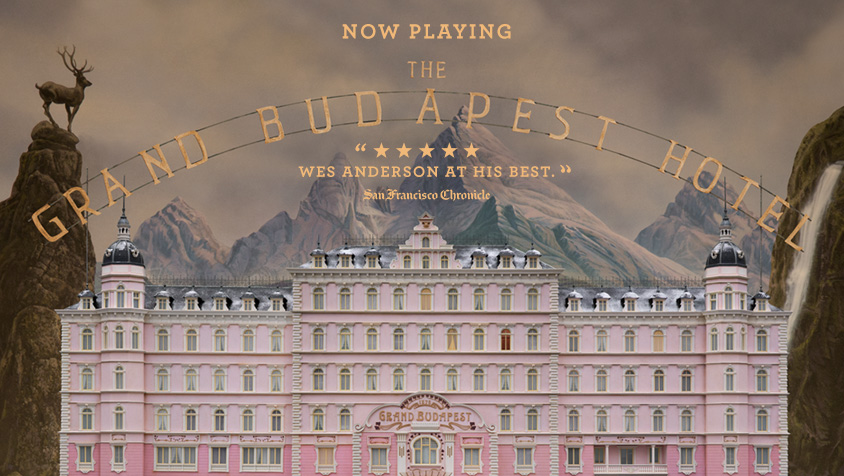 Can’t someone be a shit their whole life and repair the damage?” asked Royal Tenenbaum in Wes Anderson’s 2001 The Royal Tenenbaums, “I think people want to hear that.” Except it’s exactly that conviction—that viewers crave characters who change and who grow—that’s hamstrung Anderson’s films during the 00’s. It isn’t that he can’t do emotional poignancy: Max Fischer’s broken voice when he discovers the world is unfair and that people disappoint you (“I saved Latin. What did you ever do?”) and Chaz Tenenbaum at long last breaking down and admitting that he’s “had a really rough year, Dad” (and Royal’s gentle “I know you have, Chazzie”) are completely representative moments of genuine emotional weight. And Moonrise Kingdom was Anderson’s most viscerally pleasurable film because it had everything to do with heart and soul, a touching valentine to the purity of first love without the Andersonian affectations or bells and whistles.

But, let’s be honest: even though neither I nor you are Wes Anderson, it’s fairly easy to guess that he’s much more interested in stylistic flourishes than he is in character arcs. This obsession with style has garnered him criticism over the years, some valid (that he’s been making lateral movements for a decade and a half, and doesn’t ever try to evolve his style) and some incorrect (to suggest that his films are a matter of style over substance does a disservice to the deceptively cartoonish subject matter). There’s been a million parodies of his films, mostly because his style is so distinctive that it’s an underhand toss to mimic them. Underneath the surface of Anderson’s films has always been something mad—both angry and crazy—aching to break free and be its own thing. His characters live in their own little worlds in nearly every one of his films (Rushmore Academy, the Tenenbaum house on Archer Avenue, Steve Zissou’s boat, the Darjeeling Limited train, the island dubbed Moonrise Kingdom), and the third act of these films always had them maturing by realizing they had to outgrow these hiding places and engage with the world around them…but you never really felt like he meant it. Anderson always returned to his obsessively detailed clubhouses in whatever project he made next, and you got the feeling that he actually saw nothing wrong at all with his characters’ retreat to their private corners of the world.

All of this is what make The Grand Budapest Hotel such an achievement, simultaneously the most- and least-Wes-Anderson-y of Wes Anderson’s films. This is because Anderson allows all that stuff from underneath the surface in his earlier films—the anger, the insanity, the violence (especially the violence), and the claustrophobia—to be right there in the open. Its protagonist, Gustave H. (Ralph Fiennes in what is sure to be the year’s funniest performance), does not grow, or learn, or change. He is less a person than he is a character, less a character than he is a caricature, less a caricature than he is a life force. He is who he is, and doesn’t feel the need to lie or conform to meet other people’s opinions of him (“You went to bed with my mother!” says an angry man, confronting him; “I go to bed with all my friends,” he says, without batting an eye), and you feel that same confidence finally overtaking Anderson himself here: Fuck it, you can hear him saying, This is the movie I want to make, and you just have to deal with it.

It’s easy to deal with. The Grand Budapest Hotel is a real treat, and more than that. It tells the story of an author (Tom Wilkinson, played as a younger man by Jude Law) telling the story of a man (F. Murray Abraham, played as a young man by Tony Revolori) telling the story of Gustave H., who runs the Grand Budapest Hotel in the 1930’s. World War II has not yet happened but it’s right around the corner, and Gustave does his best to salvage what he refers to as the last “faint glimmers of civilization left in this barbaric slaughterhouse that was once known as humanity.” He has a flair for flowery language (he ends every letter and speech with a poem), and Fiennes speaks it all so naturally that it somehow doesn’t even sound “written” in the way a Wes Anderson character’s flowery language can sometimes sound written. Gustave likes to have sex with his older guests, and when one of them (Tilda Swinton doing great things in what amounts to a cameo) dies, the inciting incident for the plot kicks in. Was she murdered? Did Gustave himself kill her? Who is the rightful heir to her priceless painting known as “Boy with Apple”?

We care about this stuff, but we don’t really care about it—and aren’t supposed to. This is essentially a screwball comedy on a grand scale (think It’s a Mad, Mad, Mad, Mad World if it had a baby with Downton Abbey). What we really end up taking delight in is the experience of the film. It is entertaining, in the non-bastardized definition of that overused word. In fact, it might be one of the most purely entertaining films I’ve seen in years. It wants to be fun, it wants you to have fun, and the only demand it ends up making on you is keeping your eyes peeled for the many little Easter eggs hidden in any given frame or line of dialogue. Talk of “scribe’s fever” and another strange ailment, an “absurd little disease” called the Prussian grippe; mention of the obviously fictional—yet weirdly plausible—Maltese Riviera and Dutch Tanganyika; the enormous painting of a mountain overlooking the dining room; a child’s small apology to Tom Wilkinson and his immediate line of forgiveness interrupting the opening narration; not to mention quick cameos by all manner of Anderson veterans, from Bill Murray to Owen Wilson to Bob Ballaban.

It’s as though Anderson has finally let himself run free and do everything he’s wanted to do over the years, and is using everything he’s collected along the way to tell the story. That might not sound very appetizing to Anderson haters, but I do mean it when I say that this is also, paradoxically, the least Wes Anderson-y of his films, mainly because the thing that grates viewers of his work is the streak of passive-aggression running throughout his narratives (and style). Steve Zissou said, “Let me tell you about my boat” and the film stopped dead as the camera panned through Anderson’s rooms wherein everything was placed juuust so. But here there’s no need to stop dead because the whole film is like that; Anderson is no longer pretending to use his style as a vehicle for story. He’s coming right out and using story as a vehicle for style, a madcap adventure with eye-popping visuals carpeting the whole thing from wall to wall.

That probably also explains the uncharacteristic violence in the film, which, again, always seemed just beneath the surface before (dogs and cats die in a lot of his films), but here it’s brutal and on full display—yet always undercut with an apology right afterward. Anderson’s worldview seems always to have been that you need to burst out at the world in order to heal (Max and Mr. Bloom needed to have a vicious prank war with each other before coming to an understanding, the boys in Moonrise Kingdom killed a dog before realizing they’d been “a bunch of mean jerks”). Grand Budapest Hotel makes this its theme rather than its footnote, from the rude speech Gustave delivers to Zero to the boy pointing a toy gun in the first few seconds to the man Gustave brawls with in jail who’s “ actually become a dear friend,” Anderson mainstreams the anger and uses it as a way to make amends. Hopefully the haters will get the message, and make peace with him at long last.