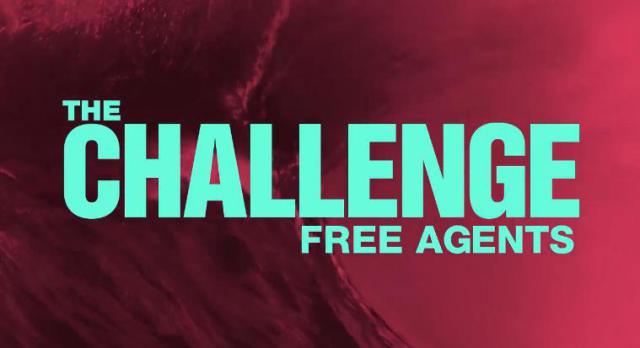 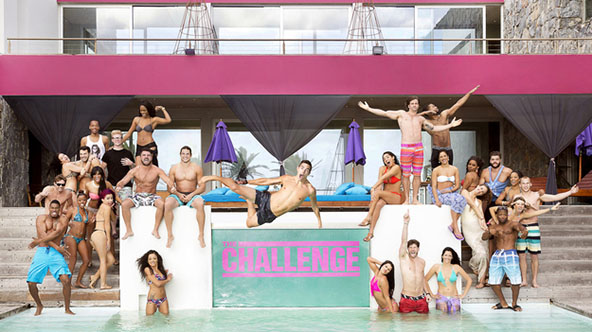 The episode began with a drunken pool party, where Aneesa started her shit-talking of Laurel, letting you know that’d be a theme for the episode.  However, it seemed like the editors were even getting bored of the house drama, because after a minute or so, there was an immediate jump-cut to the challenge.

Split into two teams, they basically had to play human soccer in that they were stuck in giant clear gerbil bubbles and they each had to try and get their “ball” (a person) into the other teams net.  I love that four weeks in, the Chellengers have still picked teams like kids, leaving Preston as one of the last kids each time, no matter what.  Jasmine being the last picked was awesome though.  The Red team had Jordan and Bananas as the balls, and the Yellow team had Zach and Isaac as balls, while everyone else served as net defense.  The first round had Zach as the ball going up against Bananas and his method is different than Zach’s.  Zachs plan was to run people over,  Bananas went around the drama like a bitch, but he won.  Round two was Jordan’s ball versus Isaac. The Yellow team yet again decided to on the defense head on, while Jordan focused on speed.  However, EVERYONE SLEPT ON PRESTON and he ended up being the reason why Jordan got in.  Round three was Zach versus Bananas again, but things were a lot more even and Zach took it.  Round four was make or break for the Yellow team with Isaac versus Jordan again.  Jordan, killed the last round, but not without Preston’s help.

Elimination voting time.  Jessica turned tailed like a straight up rat and told Aneesa that she was being gunned for by Jordan and Laurel.  Jordan did not like that by any stretch, but it was a shit move when you consider the fact that Jess was on the team.  It’s clear that whatever beef Jordan and Jess had from their season, has not gone anywhere.  The votes ended up in a tie between LaToya and Aneesa, so they had to be re-voted, and Jessica like a dumbass voted for Aneesa, right after saying that she wouldn’t creating another tie, leaving CT as the tiebreaker, and sending LaToya in AGAIN.  Aneesa lucked out hard, but I have to say it’s kinda bullshit that LaToya got sent in again so soon.  The guys vote was all over the place, but Brandon got sent in because his boy Swift screwed him.  In The Draw, Zach pulled the kill card and Cara Maria pulled the kill card AGAIN.

Basically it is a race around in a circle to ring a bell (lot of bell ringing this season), while trying to avoid contact with the other contestant.  As soon as the bell sounds, they both make moves, but CM takes the first round.  The second round was Cara Maria again, and she sent LaToya home in like 5 seconds.  Brandon versus Zach. Woof.  As soon as the bell sounds, the guys got going but Brandon got CRUSHED and Zach got the first win.  The second round winner was Zach again.

Russ: It seems like even CT is bored of himself this season.  He’s hanging with Aneesa?  That should explain everything.

Russ: He is the only person on this show I would actually hangout with still.  Sure i’d party with some of them, but he might be the only “real” person.

Russ: He wasn’t a superstar in the challenge, but I finally saw some signs of life, which is huge considering I drafted him.  His elimination win should propel him forward a bit.

Russ: Welcome to the Main Event.  Alpha Jordan Jerkface is in the BUILDING!  He was my first round pick, and he’s finally letting it all hang out.  It’s bad, but I can watch him rip people all day.

Russ: Did you have to go home or something?  Where were you this week?

Russ: The best is seeing him say that you don’t yell at girls, but he said, how he loved being able to legally hit girls 5 seconds before that.

Russ: You weren’t good at Bounce Out. So far, I’ve seen a lot of nothing from you.

Russ: four weeks in and all this guy is doing is show that its time for people to start treating Preston like someone who’s got a right to be on these challenges.

Russ: Now that Brandon’s gone, Portland’s gonna be in the running for cast-member with least fucks given about.

Russ: Kill yourself or learn how to do a confessional.  Either or.

Russ: She’s walking around the house like the overlord of the house.  I’m not really into it.  Yes, she can back it up, but still.  I’d like to see more of Emily’s style of competition from her.  Eat. Sleep. Conquer. Repeat.

Russ: I know she already had her season freak out, but I feel like it’s still early, thus we’re due another.

Russ: She’s definitely working with some of that same Karma that sent Frank home.  So next week I’m assuming that TJ sends her packing cause of a weird infection.  That aside, she’s really finally showing that it makes sense for her to keep trying these challenges.

Russ: Not a team player.  I get that it’s free agents, but you can’t start talkin to the losers like that.  Also,  keep your voting promises straight.  In one episode, you put a gigantic target on your back, and damn near everyone in the house is tired of your shit.

Russ: I’m going to give Jasmine a week off from me hating her.  There’s only so many ways you can call a woman a gross little rugrat.

Russ:  You got voted in a bunch.  Deal with it. There is always going to be people jockeying for votes, and you are never going to be on the inside.  Just because you’ve been around longest, and been the longest loser doesn’t mean people owe you anything.

Russ:  Jonna thanks her stars and garters with each Draw because the only thing keeping her on the show is luck, cause if it was up to a vote, she’d have been bounced by now.

Russ: Devyn, one day you will to prove your worth on this challenge, and it wont be pretty.  Yes, I am talking about watching her hookup with a dude. GEWWW!

Russ:  If Swift is your friend, get better friends. It’s too bad the most footage he’s ever had has is all Swift specific.  Too bad you got sent home cause your friend is a literal assclown bruh.  Maybe come back with some more personality, huh?

Russ: She was the queen of “keeping it 100″, but she’s gone.  I feel bad she’s gone when Devyn and Jessica and Jonna and Jasmine are still around, but them’s the breaks.