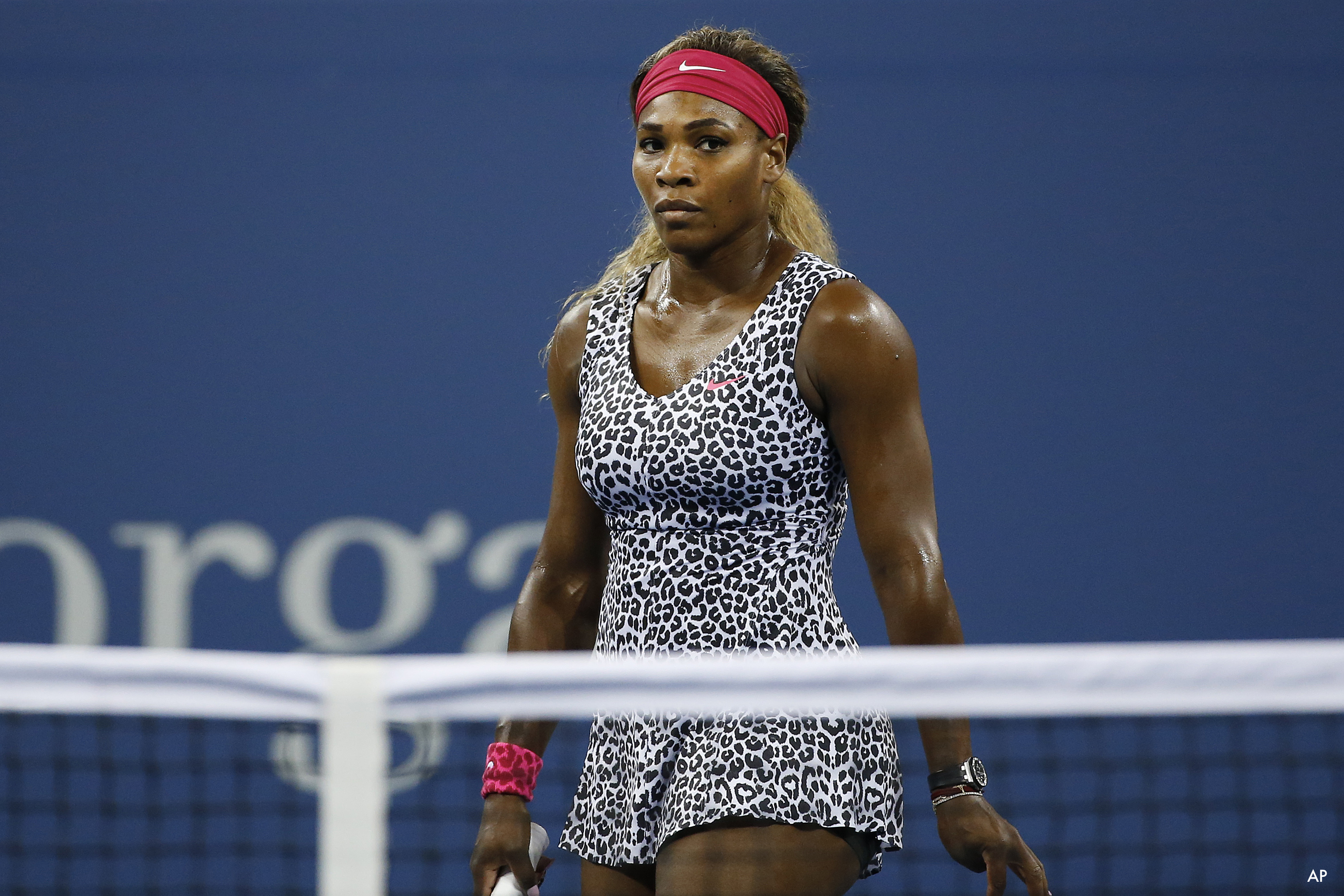 Serena Williams came into the tennis season with 17 Career Majors and primed to win more to move up the career totals list. However, she struggled mightily in the first three Majors this year and was eliminated much too early in each of them. It included an odd incident at Wimbledon when Serena was afflicted with an illness that sapped her of her strength and coordination which caused her to retire from her doubles match with her doubles partner and sister, Venus. In case the tennis world was wondering if Serena was ready to abdicate her throne at the top of the tennis world to the young stars of the sport, such as Eugenie Bouchard; Serena showed she is as dominant as ever as she cruised to the US Open Championship without dropping a set. She annihilated her fellow finalist, Caroline Wozniacki, 6-3, 6-3 in the finals. On the other hand, Serena and Caroline have become very good friends and had no problem going out in the town after the Finals in New York. In a moment of comic relief, Caroline joked that Serena would be buying drinks and Serena agreed in the award ceremony immediately after the match. It is Serena’s 3rd consecutive US Open title and 6th overall in her career. More importantly, it is her 18th career Major which ties her with Chris Evert and Martina Navratilova. There are only three women remaining with more titles: Helen Wills Moody (19), Stefi Graf (22), and Margaret Court (24). Every additional Major that Serena wins cements her legacy as one of tennis’s greatest players and enhances the case that she is the greatest women’s player of All-Time. As the US Open proved, there has been no significant regression in her skills despite her age. She has already won more Majors after the age of 30 than any other woman. As such, she will be in great position to win more next year. Nevertheless, it is never easy as evidenced by her disappointing finishes in the first three Majors in 2014. Moreover, time is running out in her career. She has already stated that she only has the desire to play a couple more years. Accordingly, it would not surprise me if next year is the last season of her career. While there may still be a discussion on whether she is the greatest women’s player of all time, there is no question in my mind that she is the most dominant and powerful woman to ever play the game of tennis.

It was an unlikely and unexpected Final as both men were long shots to make it to the end. The biggest story heading into the final was that Nishikori upset the 1 seed Novak Djokovic then Cilic upset the 2 seed Roger Federer in the Semi-Finals. In addition to those upsets, both men had impressive runs to the Finals. In round 4, Nishikori had to rally after falling down 2 sets to 1 against the rising star and 5 seed, Milos Raonic, to win a marathon five set match that went well into the middle of the night. Moreover, Nishikori has dealt with injury issues in the past and has been criticized for not playing through them. When he appeared banged up against Raonic, there were questions whether he would even finish the match. As such, it is a big moment in his career when he fought through the injuries and prevailed against Raonic. Nishikori fell behind 2 sets to 1 again against the Australian Open Winner, Stan Wawrinka, but rallied to win another epic 5 set match. In the Semi-Finals, Nishikori looked dominant against Djokovic and hit many great shots to win the first set 6-4. After Djokovic came back to win the second set convincingly 6-1, I assumed the first set was an aberration and that Djokovic had taken control of the match. However, Nishikori won the third set in a tie break 7-6 (7-4) and won the 4th set comfortably to be become the first man from Asia to make a Major final. He also did it in style.

For Cilic, he was also tested in a five set match in Round 4. However, he found his dominant, power game from the Quarterfinals through the Finals. His most impressive win was against Federer in the Semi-Finals. After Federer nearly won Wimbledon to capture his 18th Career Major, he appeared to have a great chance to win the US Open after the draw opened with his nemesis and defending US Open Champion, Rafael Nadal, withdrawing from the tournament due to injury. Moreover, Federer played great early in the tournament and rallied in epic fashion in the Quarterfinals to defeat Gael Monfils after falling down 2 sets to none and saving two match points in the fourth set. After Nishikori upset Djokovic in the first Semi-Finals match, it seemed like Federer just received another huge break and was destined to win this US Open. While Federer’s advanced age and the immense heat on Saturday were definitely factors that negatively affected his ability to recover for the Semi-Finals match after a long Quarterfinals match, Cilic’s overpowering play gave Federer no opportunity nor hope to get into the match as Cilic won the match 6-3, 6-4, and 6-4. It was an impressive victory and Cilic rode the momentum into the Finals.

The US Open Men’s Final was anti-climatic as the 6’6” Marin Cilic overpowered the 5’10” Kei Nishikori in straight sets: 6-3, 6-3, and 6-3. It is Cilic’s first career Major. Stan Wawrinka’s victory in the Australian Open was a sign that the dominance of Roger Federer, Rafael Nadal, and Novak Djokovic is coming to an end. The 2014 US Open Final is the first Major final that none of the three men participated since the 2005 Australian Open. Do not get me wrong. Nadal still won the French Open and played in the Australian Open Final. Djokovic won Wimbledon, played in the French Open Final, played in the Semi-Final in the US Open, and played in the Quarterfinal of the Australian Open. Even though Federer is well past his prime, he has made adjustments to his game to stay relevant as a contender as he reached the Wimbledon Final and the Semi-Finals of the Australian Open and US Open this year. While those finishes are a far cry from his glory days, they are still great finishes for most players and still impressive at his age of 33. On the other hand, Nadal and Djokovic will also begin to show regression from age. Nadal was often banged up due to his rough style of play even in his prime. As such, it will not get better as he turns 29 next June. These three men will still be in the mix to win Majors in the next few years. I expect Nadal and Djokvic to win more and Federer may be able to squeak out another one. Nevertheless, the US Open marks the end of an era when winning the Majors were generally an exclusive right of these three men. It should be more wide open from now on and players like Marin Cilic or Kei Nishikori will have opportunities to win Majors.