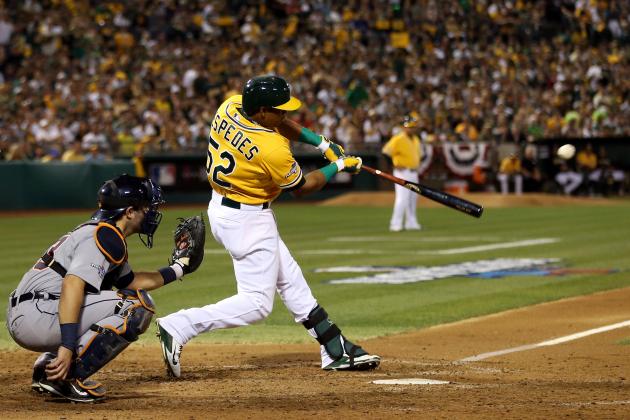 The As have the highest run differential in baseball at +59. Billy Beane has completely rebuilt this team and they move towards being a championship contender. On offense, they do it with a deep lineup of good hitters rather than great hitters. Josh Donaldson has become an excellent third baseman and leads the team with 7 homeruns. Yoenis Cespedes is second with 6 homeruns and is the one player on the team who has the potential to be a superstar. The strength of this team is great, young pitching. Even though they lost two starters, A.J. Griffin and Jarrod Parker, to Tommy John surgery, they still have plenty left. Sonny Gray showed ace potential at the end of the year and into the playoffs. He picked up where he left off and has started the season with a 4-1 record, 1.17 WHIP, 1.91 ERA, and 44 Ks compared to 16 walks in 47 innings. Scott Kazmir has been a good free agent signing as he is 4-1 with a 1.04 WHIP, 2.64 ERA, and 38 Ks versus 9 walks in 44.1 innings. Jesse Chavez is also off to a fast start with a 2.47 ERA. His 44K/10BB ratio suggests he can sustain his performance. They have had a rocky start with their closer, Jim Johnson, who they traded for from Baltimore. However, it is not really a concern. They have a great bullpen and one of the other relievers can take over if Johnson cannot pull himself together. Luke Gregerson has been an excellent reliever in his career. Ryan Cook is a great, young setup man. Either man can handle the job.

Despite a -21 run differential, the Rangers have hung in there. They brought in two top players during the offseason to help their offense by signing outfielder Shin-Soo Choo to a big contract and trading for Prince Fielder’s big contract. Choo is off to a great start batting .343 with a .481 OBP. Fielder has struggled batting .228. Moreover, All-Star third baseman Adrian Beltre missed time due to injury. Nevertheless, I do not worry about their offense as it will get going. However, the problem is the pitching. Yu Darvish is pitching like an ace with a 1.25 WHIP, 2.87 ERA, and 42 Ks compared to 11 walks in 37.2 innings. Martin Perez has been decent at 4-2 with a 1.17 WHIP and 3.59 ERA. However, his 2 K/BB ratio suggests there is regression in line in his future. The other starters have been terrible. Tanner Scheppers’s attempt to be a starter has been a disaster as he has a 1.91 WHIP and 9.82 ERA. It is alarming for the Rangers. Darvish is the only sure thing in the rotation they have at this moment. Derek Holland will return during the season but he may not be enough. On the bright side, Joakim Soria looks great in his return to being a closer. He has 7 saves with a 0.54 WHIP, 2.77 ERA, and 16 Ks versus 2 walks in 13 innings. They are threading water but need to play a lot better and huge holes have already appeared.

They are only a .500 team despite a +40 run differential. The Angels have been the biggest disappointment in baseball in recent seasons. They spent big and entered into bad, long term contracts with Albert Pujols and Josh Hamilton. However, Pujols looks more like his old self batting .293 with a .358 OBP, 10 homeruns, and 26 RBIs. Josh Hamilton got hurt but did bat .444 with 2 homeruns in only 8 games. While those contracts are still horrible, it is encouraging that both players showed life early. Of course, it is Mike Trout’s team now. He is the best player in the game but needs help to carry the Angels to the playoffs. The pitching was also a problem last year but is off to a better start. CJ Wilson is pitching like an ace at 4-2, 1.16 WHIP, 3.48 ERA, and 46 Ks versus 16 walks in 47.2 innings. Jered Weaver is not the same but is still a smart pitcher. Garrett Richards has started out very well at 3-0 with 1.13 WHIP, 3.21 ERA, and 40 Ks versus 18 walks in 38 innings. They also acquired Tyler Skaggs and Hector Santiago in the offseason to help the pitching. They are off to slow starts but they are talented and certainly better than what the Angels had last season. They are also dealing with closer drama as Ernesto Frieri has been bad and lost his job. They will need to sort the problem out quickly as they do not have a strong bullpen anyway.

The Mariners gave a massive contract to Robinson Cano to sign him away from the Yankees. He has been decent batting .295 with a .347 OBP, 1 homerun, and 19 RBIs. However, those numbers are not up to his standards and he has no help. I just do not see how the Mariners have surrounded Cano with enough help in the lineup. I believe he will get frustrated and start swinging at anything as teams will not pitch to him. They continue to have good pitching. Felix Hernandez is still one of the best pitchers in baseball at 3-1 with 1.10 WHIP, 2.73 ERA, and 53 Ks versus 12 walks in 52.2 innings. Moreover, Hisashi Iwakuma was injured and has only pitched in one game. He was tremendous last season and his return will definitely help. They also signed Fernando Rodney to close. He has pitched well enough to keep the job. However, keep an eye on Danny Farquhar as the closer of the future. He has been dominant so far with a 1.18 WHIP, 1.45 ERA, and 21 Ks compared to 8 walks in 18.2 innings. Despite adding Cano, this offense is still mediocre and is not good enough to allow the Mariners to contend.

The Astros have tanked seasons to get higher draft picks to rebuild with top prospects. However, they did try a little this year by signing veterans to help the young players: starting pitcher Scott Feldman and outfielder Dexter Fowler. Feldman has had a lucky start with a 0.94 WHIP and 1.69 ERA. His 1 K/BB ratio suggests he will implode at some point. Talented, young second baseman Jose Altuve is a promising player who has stolen 11 bases so far but is wasted on this terrible team. They will have another terrible season and get a high draft pick to continue to build the farm system. The top prospects in their system can give their fans hope. The Astros brought up outfielder George Springer to give someone for their fans to root for at games. He had 37 homeruns and 45 steals in the minor leagues last season. While he was off to a hot start in the minors, he has struggled so far in the Majors with a .228 batting average and 29 Ks in 20 games. Springer will be fine. He has a world of talent and a good head on his shoulders. He is a future star.