It was another great year in sports. We started the year with the first College Football playoffs that Ohio State won despite losing two quarterbacks during the season. Then, we enjoyed a great NFL playoffs that included deflated footballs and an epic Super Bowl that came down to the wire and the most infamous play call in NFL history. The Kentucky Wildcats were denied perfection in the Final Four. Coach K and his Duke Blue Devils won the National Championship again [one for the thumb as Coach K now has 5]. The women UCONN Huskies were denied perfection too but were not denied another championship as they completed another threepeat. Jordan Spieth catapulted on to the golf scene as one of the best young golfers by winning the first two Majors of the year and coming close to winning three straight at the British Open. Lebron James attempted to end Cleveland’s fifty year championship drought and will his Cavaliers to a title despite losing his two All-Star sidekicks before the Golden State Warriors eventually overcame them. The Chicago Blackhawks won the Stanley Cup again, 3 in the last 6 years. We saw the first Triple Crown winner, American Pharoah, in horse racing since Affirmed in 1978. The US Women’s National Team won the World Cup in spectacular fashion. Serena Williams won the first three Grand Slams of the year but just fell short of completing the first calendar Grand Slam since 1988 losing in the semi-finals of the US Open. Novak Djokovic just fell short of completing a career Grand Slam when he lost in the finals of the French Open but won the other three Grand Slams. The Kansas City Royals fell 90 feet short in the 2014 World Series but came back in 2015 to finish the job. We had plenty of great moments during the year. Below are my personal bests:

The Super Bowl is the biggest sporting event of the year. The Seattle Seahawks took a24-14 lead into the fourth quarter and were primed to repeat as champions. However, Tom Brady had other plans and drove his Patriots to two touchdown drives in the fourth quarter to give them a 28-24 lead. Nevertheless, the Seahawks made a drive down the field that included a ridiculous 33 yard catch which was deflected into the hands of Jermaine Kearse. It was reminiscent of the Helmet Catch made by David Tyree in 2008 that was a key play in denying the Patriots a perfect season. History would repeat itself again when the Giants had another game winning drive to take another championship away from the Patriots in 2012. As a result, history appeared to be repeating itself again when Kearse made that catch and Marshawn Lynch carried the ball to the 1 yard line to make it second and goal. In an unthinkable decision, offensive coordinator Darrell Bevell called a pass play. As we know, Malcolm Butler jumped the interior cross route and intercepted the ball. The Seahawks snatched defeat from the jaws of victory. They were 1 yard away from back to back championships and had the most punishing running back in the NFL. The decision to throw is inconceivable and will be remembered as the worst play call in NFL history. It handed the Patriots a fourth Super Bowl victory. Super Bowl XLIX is the game of the year and one of the best in history. Serena Williams won Sportsman of the Year. She had a great season and is a worthy recipient of the award. I am a big fan of Serena and really wanted to see her complete the Calendar Slam. If she pulled it off, it would not be debatable that she is the Sportsman of the Year. However, I have to admit that Novak Djokovic actually had the better year in tennis. He made it to all four finals of the Grand Slams and won three of them just like Serena. He also did against tougher competition. Serena is incredible, especially with her dominance at such a late age, but she is also currently light years ahead of the next best female tennis player. Djokovic crushed and broke the will of Rafael Nadal in the French Open quarterfinals. Although Nadal is not the player he once was, he had only lost once before in the French Open and was the five time defending champion and has 9 French Open titles overall. Djokovic also defeated 17 time Grand Slam Champion Roger Federer at the Wimbledon and US Open Finals. Federer is definitely past his prime but arguably playing better than any male tennis player ever at his advanced age. He had also steamrolled the competition to get to those finals this year before Djokovic beat him both times in 4 sets despite overwhelming crowd support for Federer. In general, there are just more male players that can challenge him (e.g. Andy Murray, Stan Wawrinka, etc.) and he is dominating anyway. Djokovic finished the year with an 82-6 overall record and 11 titles which include those 3 Grand Slam wins. 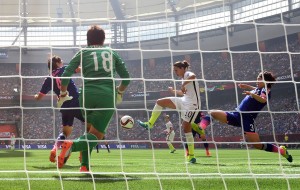 Carli Lloyd scoring a goal in the World Cup Final.

Carli Lloyd has been a money player for the US Women’s National Team. In the 2012 Olympics, she scored both goals in the Gold Medal match to lead her team to the victory. One would think that performance would be difficult to top. Nevertheless, she did it in this year’s World Cup Final with a Hat Trick in the first 16 minutes. She capped it off with a goal that she launched from the halfway line and completely caught the Japanese goaltender off balance. The US went on to complete a dominant win 5-2. In addition, the victory was made even sweeter by the fact that Japan had beaten the US in the 2011 World Cup on penalty kicks. 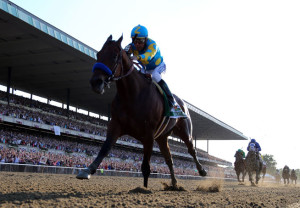 American Pharoah racing down the final stretch of the Belmont Stakes to win the Triple Crown.

There have been a number of horses that have come close to the Triple Crown since Affirmed last won it in 1978. It had been so long that most thought the feat had become impossible. American Pharoah won handily at the Kentucky Derby and the Preakness Stakes. However, the Belmont Stakes is the longest race and considered the most difficult leg of the Triple Crown. Consequently, it was an unbelievable moment when American Pharoah pulled away from the rest of the field and crossed the finish line to complete the Triple Crown.

It was the most hyped boxing match in years. Unfortunately, it ended up as a complete snooze. This match occurred five years too late as both boxers were past their prime. Perhaps, it was part of Mayweather’s master plan to face Pacquaio after he had lost his punching power and had no chance of ending Mayweather’s undefeated record. 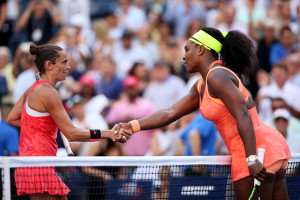 It is among the biggest upsets in tennis history, if not the biggest. Vinci became the oldest Grand Slam semi-finalist, at age 32, when she faced Serena in the US Open Semi-Finals. Surely, she had no chance at ending Serena’s quest for the calendar Grand Slam. Later, Vinci even admitted that she did not even think she had a chance to win the match. In addition, Serena steamrolled Vinci in the first set. However, Vinci kept on battling and making Serena hit extra shots. It is possible that the pressure of the Grand Slam became too much for Serena. It was certainly the correct strategy for Vinci to just put the ball in play and invite Serena to beat herself. Nevertheless, the field appeared to have cleared for Serena to walk her way home to the US Open title and calendar slam. An upset from Vinci seemed impossible but it happened and denied Serena tennis immortality. 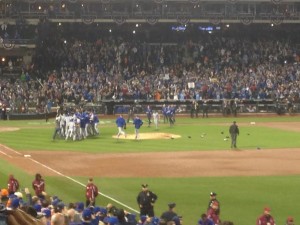 Kansas City Royals celebrating the World Series win as taken from my iPhone.

There are no shortage of great championship teams this year. I am going to go with the Kansas City Royals as best team in 2015. They were so close to a title in 2014. They came 90 feet short and had Madison Bumgarner deliver an all-time great World Series performance against them. It is extremely difficult to get to the World Series and even more difficult to return the very next year. However, the Royals used the loss in 2014 as a rallying call and returned to the World Series in 2015 to finish the job. They were nearly eliminated by the Houston Astros in the Wild Card Round when they fell behind 6-2 heading into the 8th inning of Game 4 in Houston. However, they came back and made comebacks the norm in their postseason. I experienced it live in person during Game 4 and Game 5 of the World Series. Sitting in the stands, I thought for sure that the New York Mets would win Game 5 behind a legendary pitching performance by ace Matt Harvey. Even though the Royals waited till the ninth inning, they finally got to Harvey in that inning to tie the game and eventually win the game and World Series in extra innings. It is an amazing story of perseverance. Stephen and Riley Curry answering some questions at a press conference.

Lebron James is still the best player in the NBA. He dominates in every facet of the game and makes his teammates better. Just look at what he did in the playoffs to get his team to the NBA Finals and a Game 6 despite losing Kevin Love in the first round and Kyrie Irving in Game 1 of the NBA Finals. Nevertheless, Stephen Curry has captured the imagination of the fans. He is already one of the best shooters of all time. He combines unlimited range with incredible ball handling skills. He is a willing and great passer. He is able to dribble penetrate but can pull up on a dime at any time better than any other player in the league. His modest physique inspires many young players. No one has the superior build of Lebron James but many people look like Stephen Curry. His domination of the NBA allows many young players to dream they can do the same. More importantly, his joy for the game translates from the television screen and is infectious for viewers. Of course, his cute and adorable daughter Riley became a star too during the 2015 playoff press conferences.

Patrick is a contributor for Rookerville. He is an avid sports fan. Before joining Rookerville, he was part of a defunct New York Yankees message board, NYYankeefans, where he was its top poster and was inducted in its Hall of Fame for his contributions. Patrick is also a passionate fan of movies. He has enjoyed reading movie reviews over the years and is excited about the opportunity to review movies. Patrick is also a passionate foodie. He is Yelp Elite for three years in a row and shares his great finds in New York and his travels.