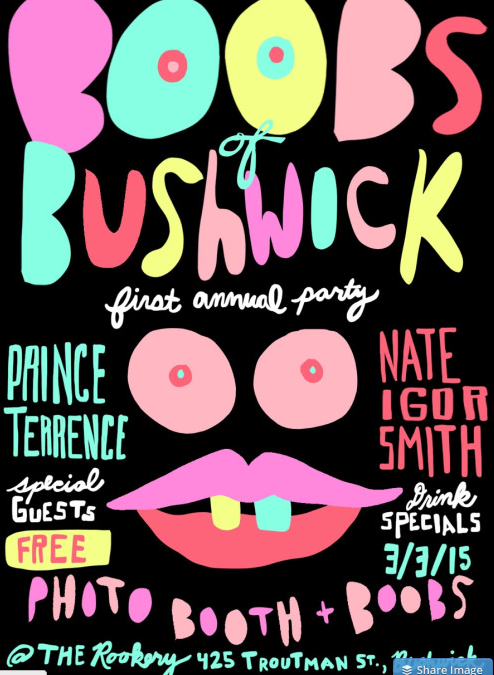 This is a little late, but w/e, it’s still relevant.

On March 3rd, 2015, The Boobs of Bushwick threw a party at the Rookery. It was a slushy, snowy, shitty day early in the month, but Rookerville told me to do something with my life, so I went.

For those of you not in the know, The Boobs of Bushwick is a group of pals led by Kate Chiplinsky who hang out at various bars and venues in Bushwick like normal people, but only topless. It’s really fine. It’s NBD. Really it’s just people not wearing shirts. It’s casual exhibitionism, and in a perfect world, it probably wouldn’t even be considered “exhibitionism.” But for some reason we’ve managed to make it into a world were exposed breasts are huge statements. Could you imagine a world where we wrote 1000+ word thinkpieces about men’s toplessness? What would you even say?

So why the hell are we still doing this now?

I arrive to the Rookery at 8:20, but I don’t go in until an hour later. Instead I kill time at two nearby bars drinking whiskey and eating fish tacos, while I wait for a friend to arrive.

I went with my pal Dinah because I didn’t want to feel male gaze-y around a bunch of strangers. She arrived and we went into the space, which was crowded af. I ordered two Tecates and tried to act like I wasn’t looking around as I spoke with my friend about television and “gee how crowded” the place was.

I had never been to the website so I was expecting a bunch of politically charged 50 year olds, but it was less about *Making A Statement About Society* and more about casual exhibitionism, as I gathered from the crowd and the website afterwards. This really ain’t no thing. Here, breasts and women’s bodies aren’t objects being creeped on by guys like Terry Richardson and Joe Francis. They are the subjects (I mean, yeah, I guess, for the most part), and these “exhibitors” are the ones demonstrating control and eliciting (or not eliciting) responses from various members of the “audience.”

(But mind you, this shit is really not a big deal at all, and the fact that I’m even writing this article is more business than it’s really worth.)

With this I think we can understand the merits of this kind of event and this kind of group, despite the Brooklyniness of it all. It’s not about the reactions or the audience–its about the action of reclaiming control of what a person’s body (specifically a woman’s body) is allowed to be.

The second some girl flashed her boobs and some guy went “SOMEONE GET THAT GIRL A DRINK” I was out. Driven By Boredom actually has a pretty decent photo gallery of the party. It got nuts, but like every good sadsack piece of shit amateur deadbeat reporter, I left before it got REAL interesting.*

This party got me thinking about lots of things happening in Bushwick. I was prepared to write a scathing rant about the stench of unchecked privilege and decadence that you often find at these “So Brooklyn” shindigs before I actually went to the event. But in all honesty it was a well promoted party all in good fun that will get people talking.

In this context, the women’s toplessness isn’t a form protest. It’s really a non-statement.

A day later I got to speak with Kate on the phone for about 10 minutes after I finished my workday and she was about to start hers. I didn’t prepare questions. And, um, yeah–she was nice. Seemed to be very interested in people.

Me: One of the main questions that I wanted to ask you was: Do you run into a lot of assholes when you do this?

Kate:  No, actually I don’t. I mean, last night at the party I got punched in the face, but it was unrelated to what I do. Everyone is generally pretty rad about it.

ASIDE: She did get punched in the face. Check the photo galleries.

Cool, cool. So, how did you get started with the group; what’s it all about?

I started it 3 years ago around May. It was hot—summer—and I decided to stop wearing bras. My Mom died from breast cancer so I was like, you know what, I think I don’t want to take the risk. It can be potentially harmful.

It was just summer in Bushwick. Bushwick is like a town full of hipsters in sleeveless shirts—we all cut the sleeves of our shirts; there’s like side boob hanging out…[etc]. We decided to start taking photos, ‘cause it’s legal in New York. It was just sort of a fun thing.

I went to check out the party and write about it but I actually wasn’t familiar with the site ahead of time. I actually checked it out after the party and was like “oh ok.” I was expecting a group of 50 year old, very militant serious minded older women, but it seemed like there was a real sense of levity about the group. It seemed oddly fun, even silly at moments.

Definitely, that’s kind of the point.

Yeah, I was sort of nervous walking in because I didn’t want to seem like a creepy dude walking in and—

No dude, I mean I can spot a creep from a mile away.

Yeah, well, the nervousness that I had felt going in– I got there and went “oh, this is what this is.” It kinda highlights the bullshit double standard that we have when it comes to wearing shirts and not wearing shirts.

Well, you know how [Facebook] works; I had Facebook and I put up one uncensored photo and my entire account got deleted I got an email saying that the reason why is because Facebook doesn’t allow genitalia and women’s nipples—women’s nipples—or breasts or whatever. Are you fucking kidding me? I used to work as a social media expert, so I had a back-up anyway, but fucking fuck Facebook. So it’s okay for men to be shirtless on the Internet and Facebook, not for women?

It’s cool that you guys have your pictures up everywhere else, though—for now. I’m not sure what the censorship policies are, but it’s sort of crazy how it’s legal in the real world, but not in the digital world—it’s still a big deal.

I don’t know if you knew this, but it was 1934 when it became legal for men to be shirtless in New York. Men protested because it was not legal for a man in New York City to be topless.

Yeah. You can research it, but they protested by going shirtless on the beach and then it was legal in 1934 for men to be topless.

Crazy, huh? There’s a lot of information about it online.